TOP 5 PLACES TO GO IN BOSNIA-HERZEGOVNIA

I went to the Balkans in the summer of 2016 with my university for a study abroad trip and it was by far the best decision I've ever made in my life.

In this blog post I list out some of my favorite parts of the country and some highlights in the areas that are worth checking out. Hope you enjoy!

Sarajevo was the first city I'd ever been to in Eastern Europe, and I was not disappointed. It was by far the most unique I'd ever been in.

Personally, since I'd been to Western Europe already, I was enamored with the Eastern part of the city. It was unlike anywhere else I'd been to.

On the Eastern side of the city, there is a call to prayer 5 times a day. There are hookah cafes and stalls lined with trinkets that I'd previously never come across (but friends and those in my group who'd visited the Middle East were more than familiar with).

On the Western side of the city it was similar to Western Europe. It had more Americanized food options in the restaurants versus the classic Bosnian dishes it offered on the Eastern side. (If you're curious, a classic Bosnian dish is called Ćevapi and typically includes grilled minced meat/kebab, sliced white onions, and pita bread).

Below is some of the architecture and items that I and my study abroad group came across and admired.

During a walking tour in Sarajevo, we came up to where Archduke Franz Ferdinand of Austria was murdered on June 28, 1914 which sparked the events for WWI. Franz Ferdinand of Austria was assassinated in the corner of that bridge (see below). The building also commemorated the event and specifically left a message carved into the side in honor of the Archduke's memory.

When you walk through the city, you can't help but notice all of these holes in the sides of buildings. At first you'll think that it's maybe poor construction or something similar or it just hasn't been updated in a while - like I first assumed - but it's actually from when the city was under siege during the 1990's during the Bosnian war.

The country, and the city in particular has a complicated history. (I won't go into a lot of detail, but it is slightly important to understand some parts in the construction of the city).

During the 90's Sarajevo was held under siege between the Bosnian Serbs (Orthodox Christian Serbs), the Croats (Catholic Croats), and the Bosniaks (or Bosnian Muslims).

On my groups walking tour, I was shocked when we stopped at a literal divide in the middle of their city! The line legitimately separates the Western European styled buildings from the Eastern styled buildings. After learning more about the history of intense tension between the ethnic groups the division line made more sense, but it still felt sad to see such a literal divide right in the middle of everything.

Another awesome spot to check out while you're in Sarajevo is their abandoned Winter Olympic stadium from 1984. My friends and I took cabs there - it was raining and gloomy out but it was totally worth it. The slopes were covered in graffiti art and it goes on for miles.

Lastly, there's a spot that overlooks the city called "The White Fortress" and the view is definitely worth the trek. Archeological studies have shown that the oldest parts of this fortress date back to the 14th or 15th century. Most recently it was used to store guns and cannons. Now? It's abandoned, covered in graffiti and girls who take instagram pics on it. (Guilty 🤷)

To get there you have to go through a graveyard that's actually designed quite beautifully with white headstones everywhere - that's how you know you're going the right way.

Overall, Sarajevo was one of my favorite places to visit in Bosnia-Herzegovnia and I highly recommend it.

VRELO BOSNE or "Spring Of The Bosna River"

This is located on the outskirts of Sarajevo but I definitely think it's work trekking out to. It's a lovely park and it was really relaxing and had beautiful spots. 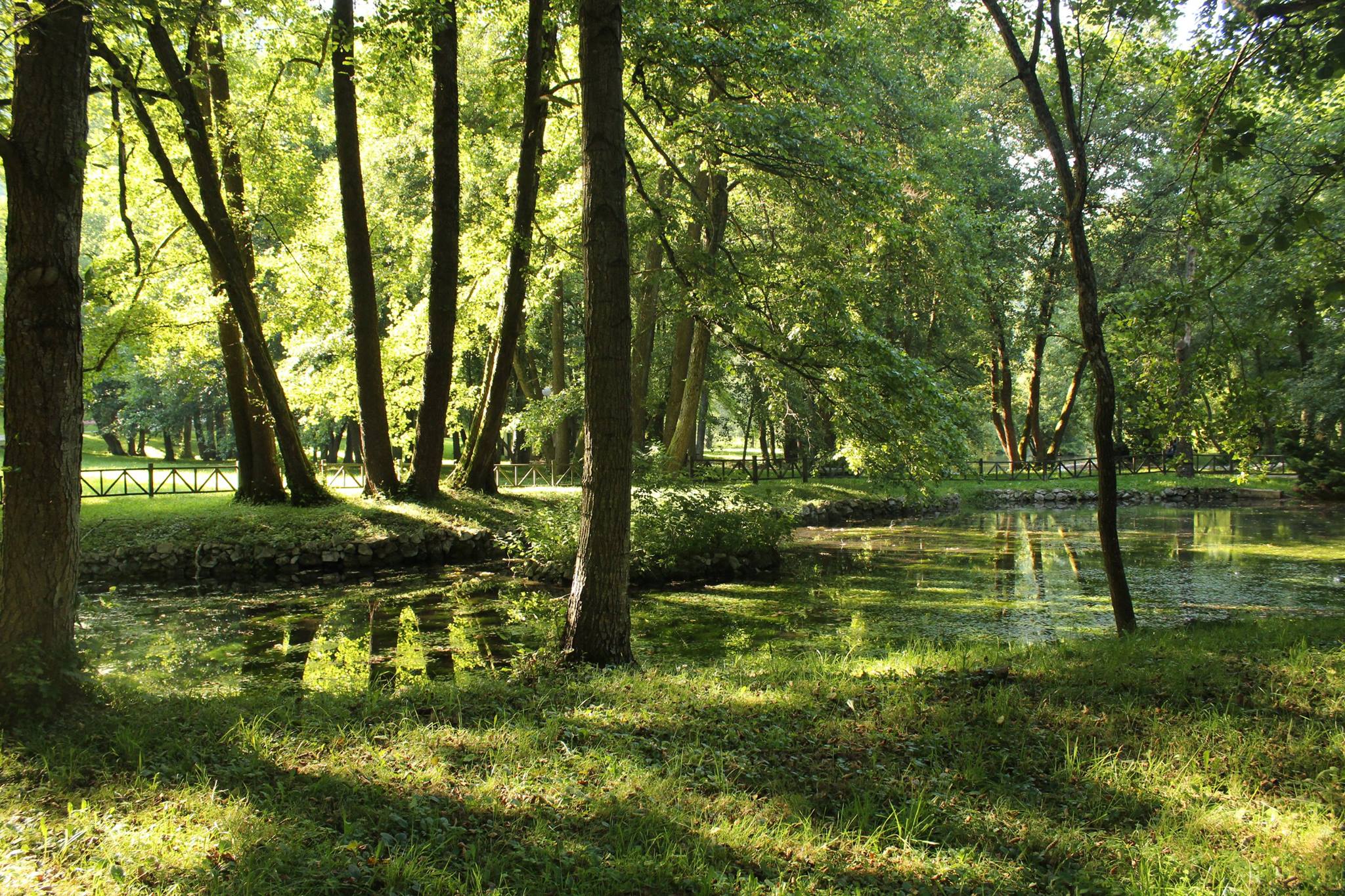 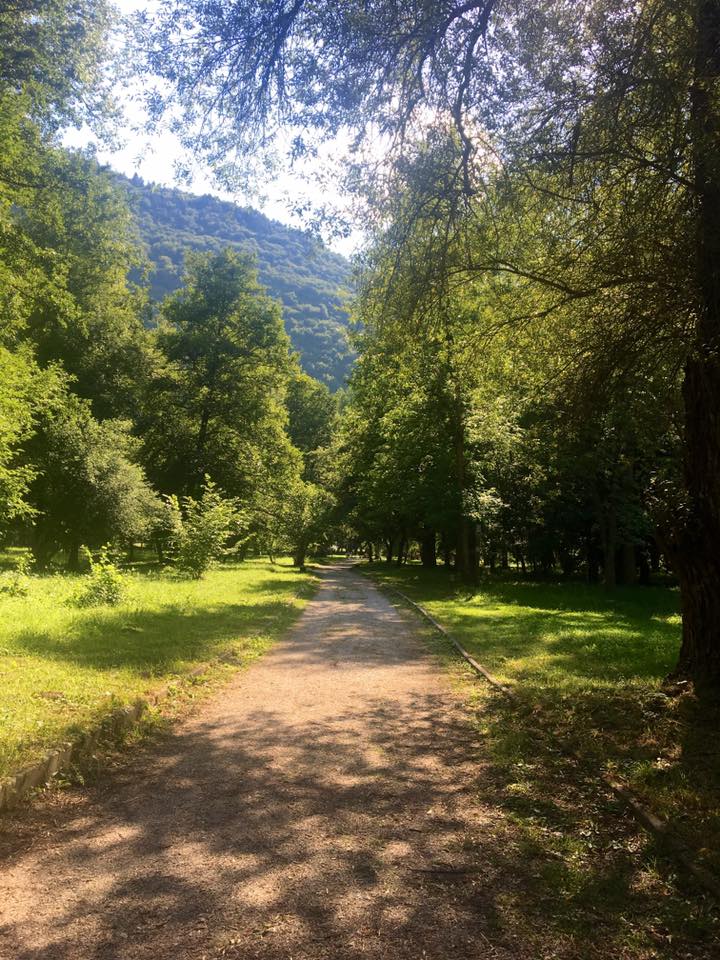 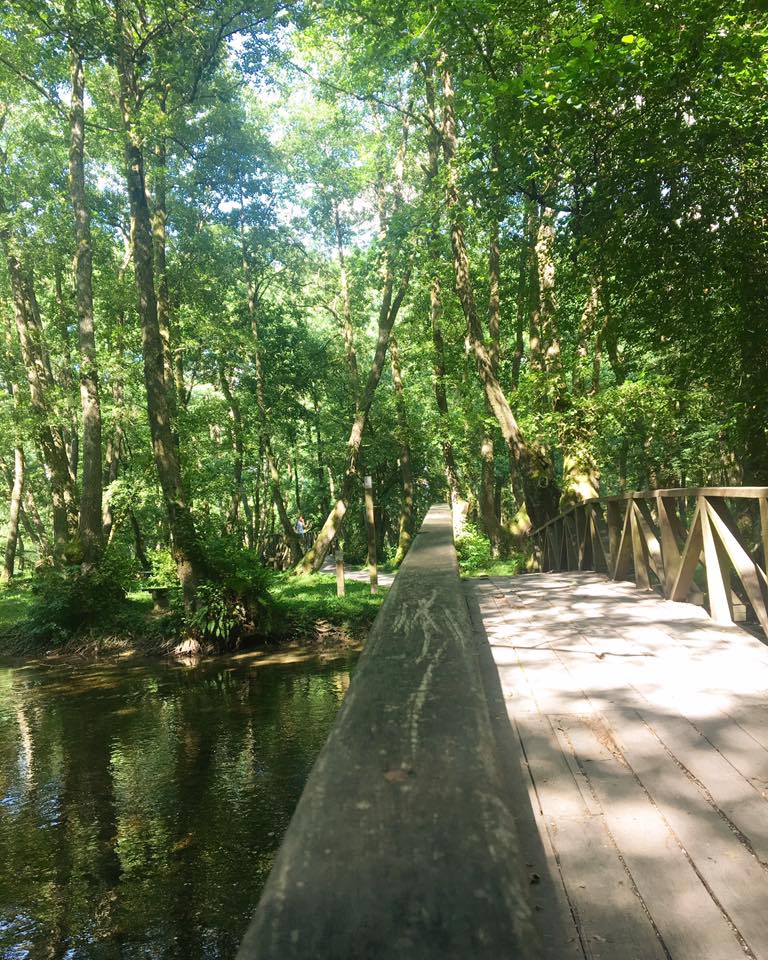 This area has a very popular tourist destination known as "Tito's Bunker" - and if you're anything like me and had no clue what this was before you went, no worries.

But, before I get into that, the surrounding town is actually really lovely and I definitely recommend making a pit stop on your way to the bunker. 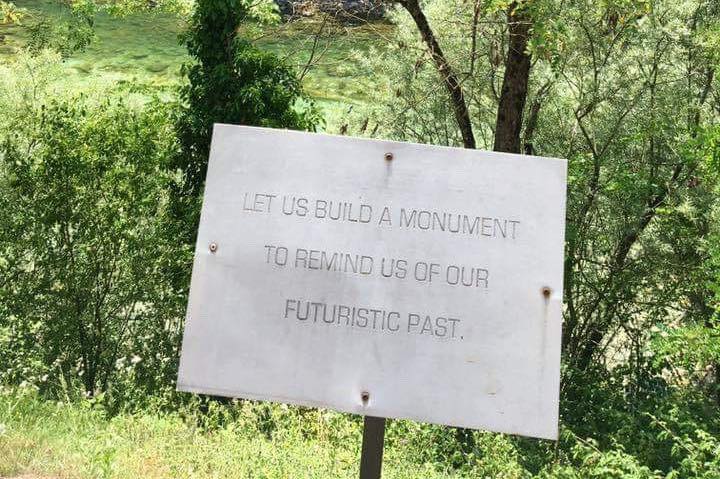 Anyways, Tito's Bunker is essentially a huge bunker that was actually kept secret from 1953-1979 in the event of an atomic catastrophe. Not to mention that it cost $4.6 billion to build (about $25 billion in today's currency). It was constructed for the Yugoslavian president Josip Tito and 350 of his closest friends. It has offices, conference rooms, bedrooms, random rooms. Now it features art exhibitions which looks pretty cool. Though to be honest some parts are a smidge creepy and reminded me of the walking dead (but that may have been because I'd recently watched it 😅)

This city is by far one of the prettiest we visited, and definitely the hottest. It's famous for its temperatures. I recommend wearing something comfortable and putting on lots of sunscreen and staying hydrated, especially if you're visiting in the summer.

Obviously, Mostar's point of pride is their famous bridge. And no, most people don't jump off of it. I mean there is a guy who does but he collects money before he does it (And it's slightly annoying having to wait to see it until he collects enough - somehow he always does!) But I definitely don't recommend diving off of this bridge if you're not a professionally trained diver. 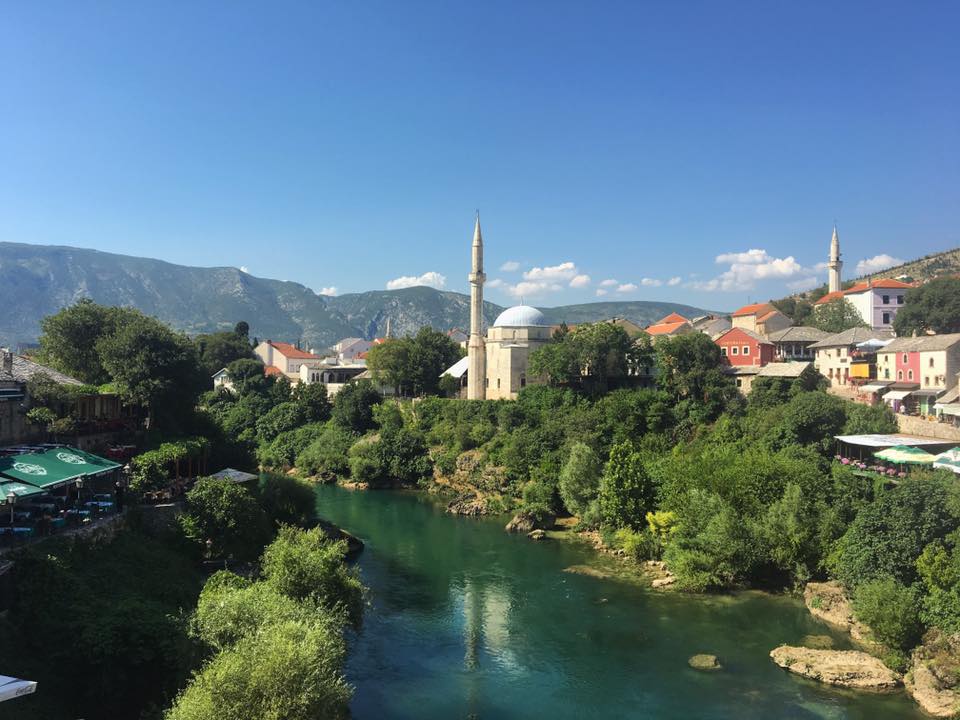 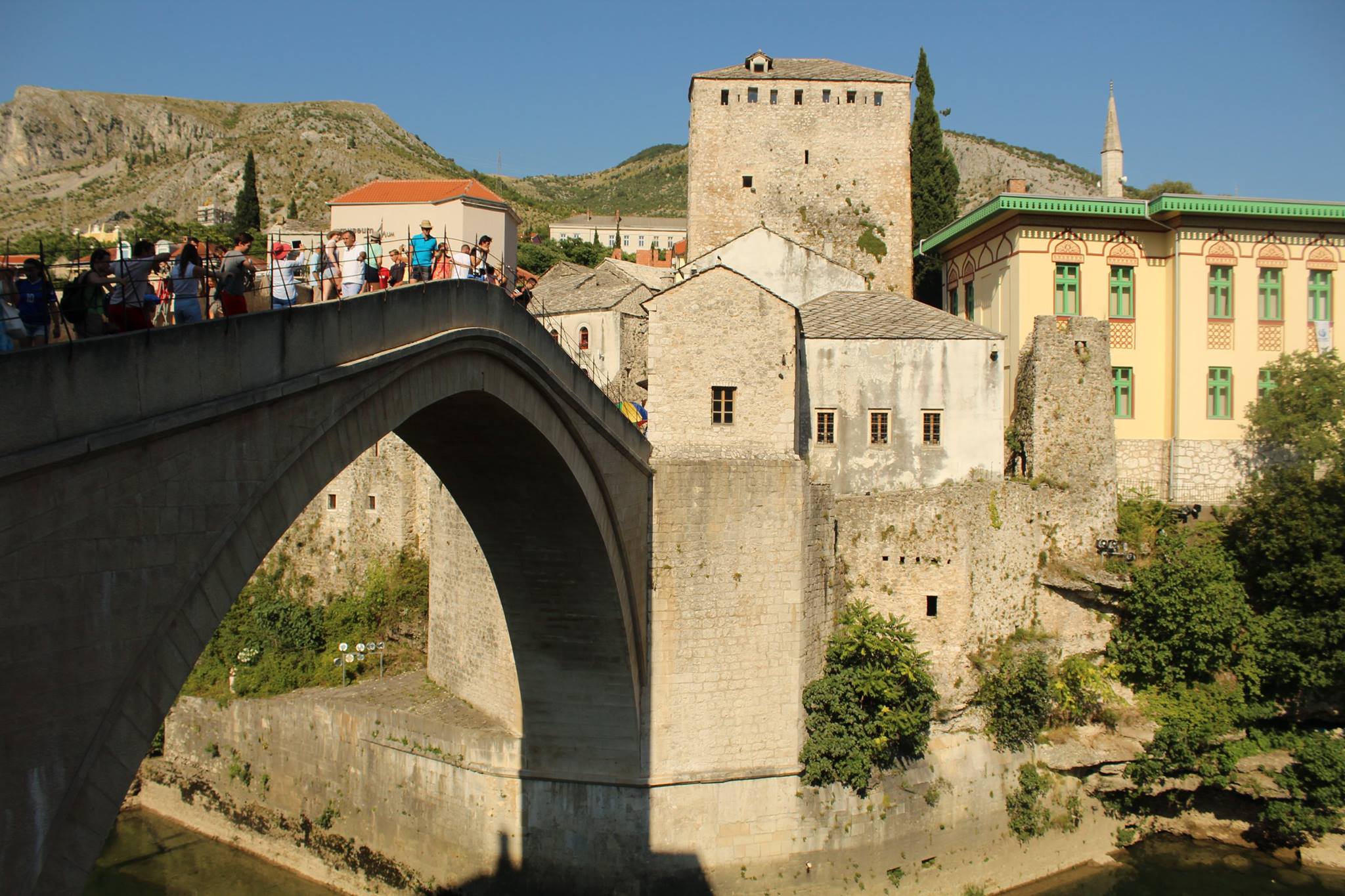 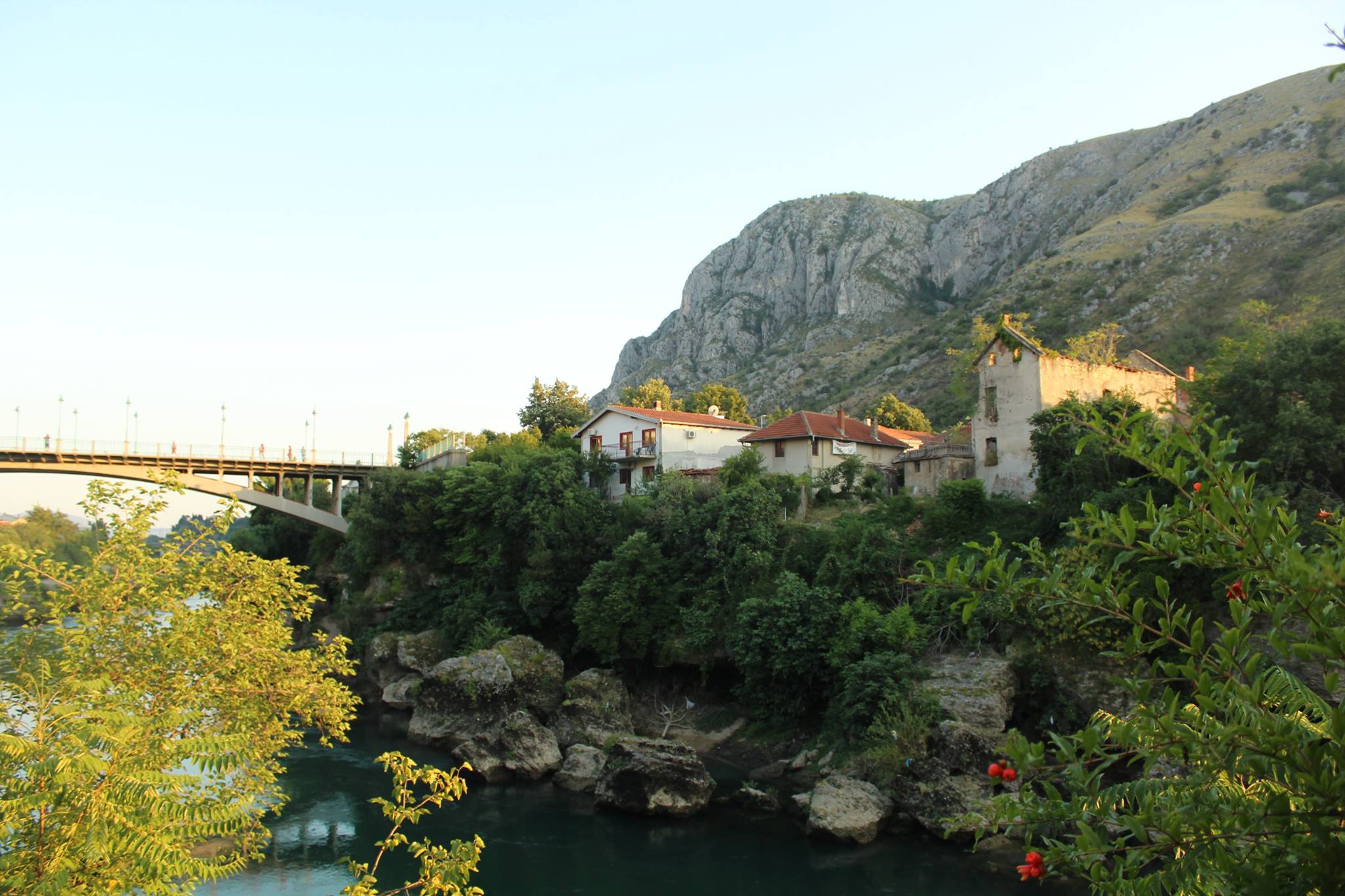 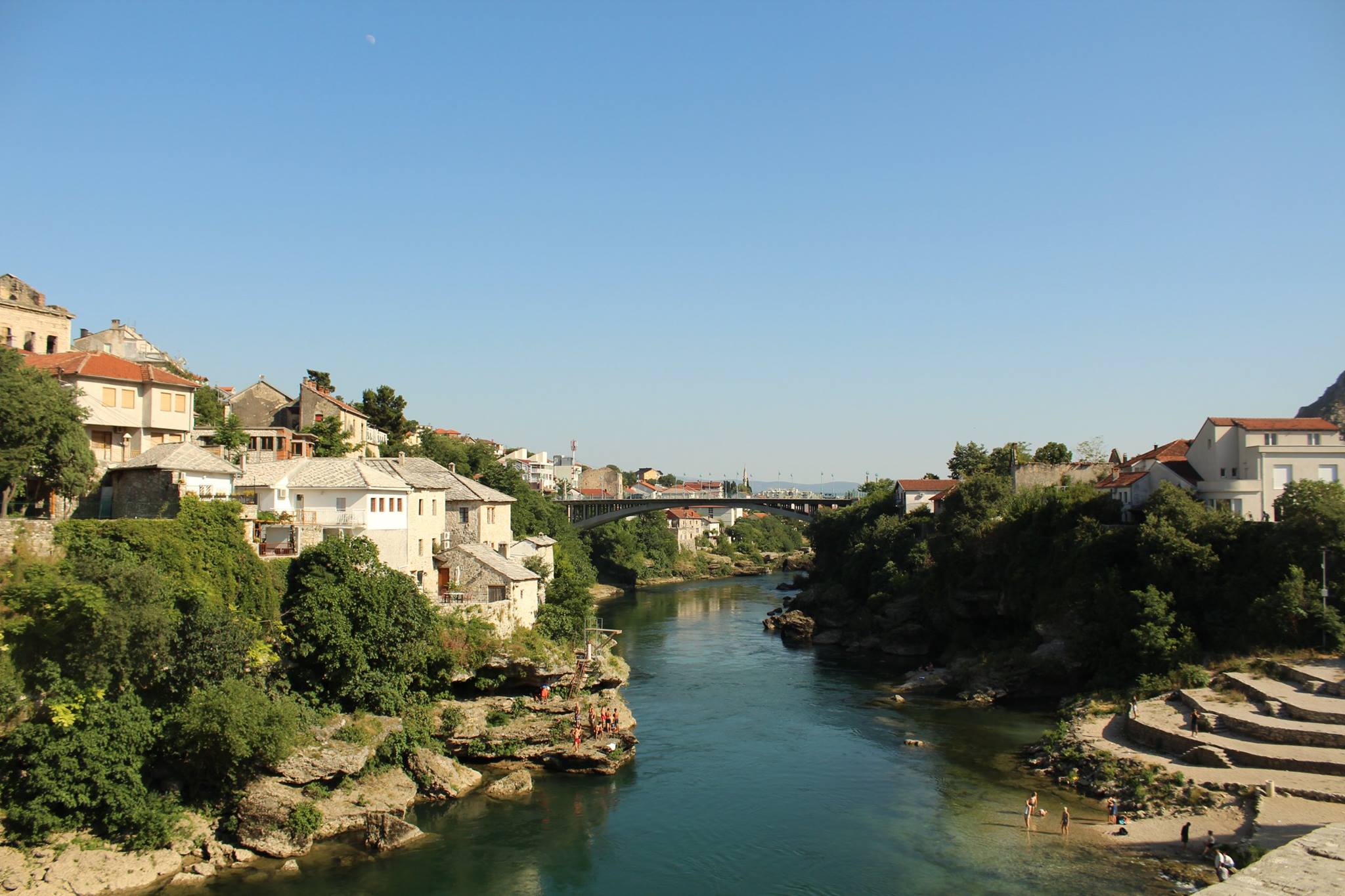 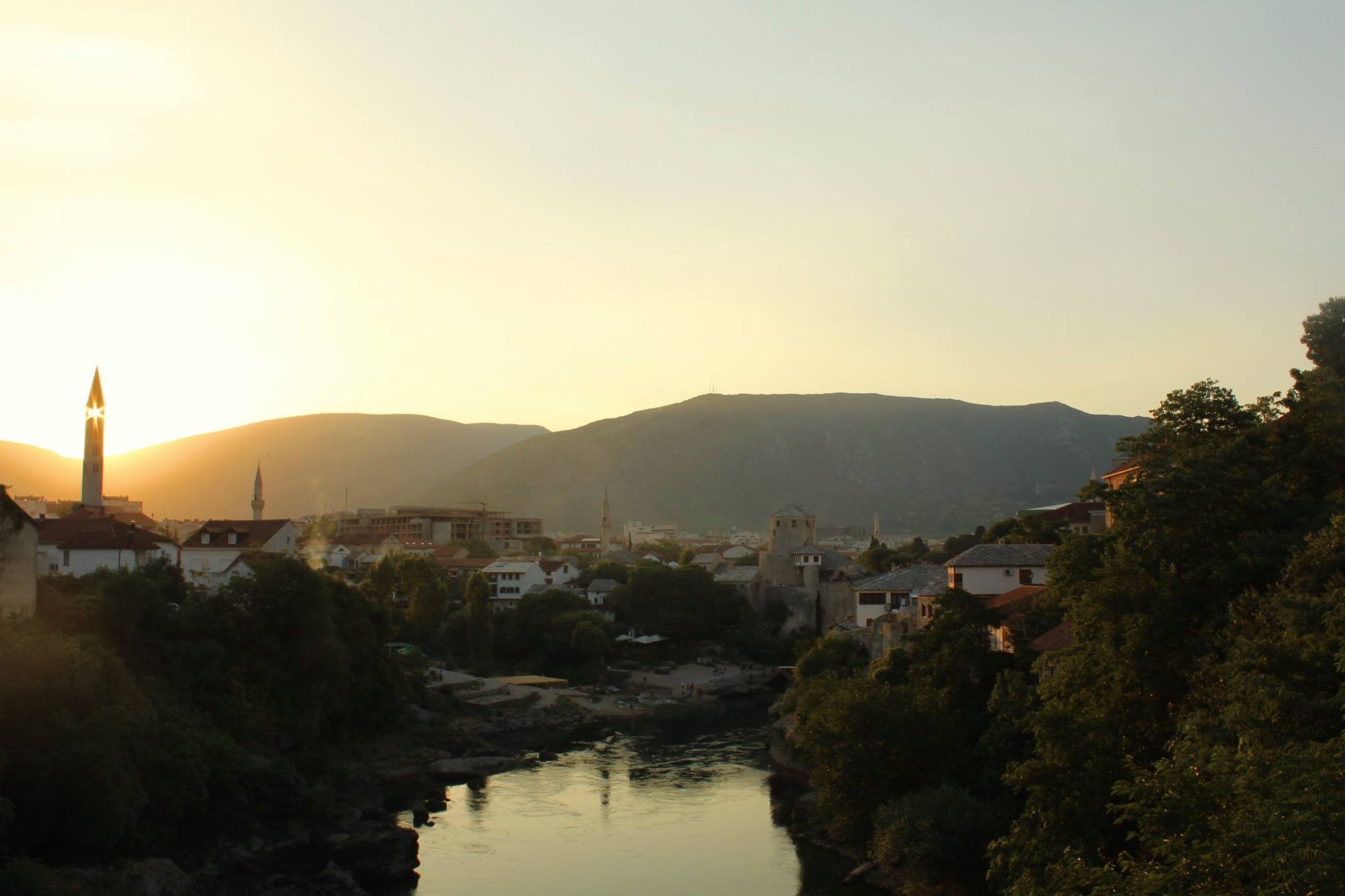 Mostar's famous bridge, the Stari Most, and most of the town that has been around since 1459 was actually (devastatingly) destroyed during the 1990s conflict but it was rebuilt and restored in 2004 (UNESCO, 2005).

Lead up to the bridge (Watch your step!)

On each side of the bridge are incredibly cool markets called čaršija. Again, because of the ethnic tensions that exist in Bosnia and specifically in Mostar, the markets are split.

In Mostar's case the tensions are between the Bosniaks and Croats ethnic groups that live in the city.

The markets aren't strictly for tourists though which makes them even cooler and more fun to check out. Obviously there are clearly tourist trinkets, but you see locals hanging around there and shopping among tourists as well so you can get a glimpse for typical everyday life too.

There's one particular spot on the opposite end of the bridge from when you first walk into the town. It has a restaurant, bar, lounge, etc. inside of a cave. It was truly a very unique spot. For anyone who's interested in the night life or getting an afternoon drink in a unique location, the spot is called: Ali-Baba.

Bosnia-Herzegovnia is a place that is near and dear to my heart.

I met some truly incredible people on that trip - people who I love and still call good friends today. I even met my current partner of 3 years now on that trip.

Not to mention that even though I got so sick on this trip - to the point where I couldn't even feel my right leg (and messed it up bad enough that even today I still can't feel it fully) It was beyond worth it. I would do it all over again in a heart beat. (Speaking of, if you do need emergency services it's not expensive to pay out of pocket, I paid less than $15 for some fluids and care, etc.)

BUT even with those harder aspects of the trip, I truly would do it all over again. It was so worth it.

Alena Zafonte - Thank you for not only being the most awesome roommate on this trip and just a genuinely great human but thank you for letting me take advantage of your awesome camera skills for this blog post. You're the best!

TOP 6 PLACES TO VISIT IN PERU

A NAME OF LEGENDS